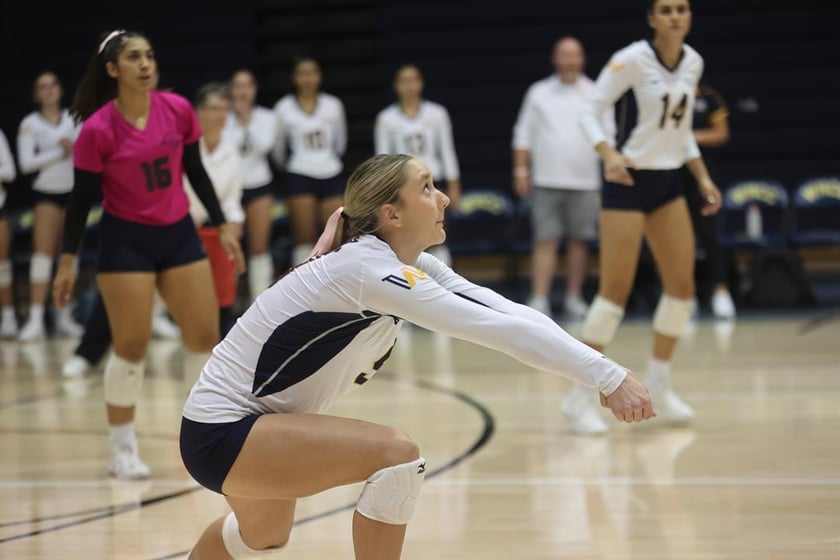 The 7th-ranked Western Nebraska Community College volleyball had nine aces, including three from Anakaren Chavez, as the Cougars swept past Laramie County Community College 25-8, 25-12, 25-19 in action Tuesday at Cougar Palace.

Chavez also had a double-double in the contest with 18 digs and 10 points in the win while Erica Fava had a near double-double with 10 points, eight digs, six kills, and two aces.

Fava said they played pretty well all the way around.

“I think we played well. We kept our energy up and we didn’t make a lot of mistakes and that was our goal for this game,” the sophomore from Italy said. “We just played at our level. We had a good serving game and I think blocking was good too”

What stood out was the Cougars' depth as WNCC had six players register at least two kills and eight players get at least two service points.

“Serving is a big thing with our team,” Fava said. “When we serve good, we make it difficult for the other team to pass and be in system. Every time we serve well we have good games.”

WNCC’s strong serving took effect early in the first set. With the contest tied at 2-2, Jenna Curtis hammered down a kill and then served seven straight points for a 10-2 lead. LCCC came back on three points from Brooke Parker, but an Emmalei Mapu kill stopped the run, and then Chavez went on a 5-point run that included two aces for a 16-6 lead.

With the score at 17-8, Alex Hernandez hammered down a kill and then Fava closed out the set with seven straight service points for the 25-8 win.

The second set started similarly to the first. LCCC had a 2-0 lead after a point by Sidney Kettelkamp. WNCC got a sideout and Charli Blackman had five points for a 6-2 lead. LCCC came back and tied the set at 9-9, but a kill from Blackman sent Hernandez to the service line and served up six points including two aces for a 16-9 lead.

LCCC trailed 19-12 when Ale Meoni had a kill and then Chavez finished off the second set with five points including an ace and the final point on a Fava kill.

The third set was a battle back and forth as WNCC took a 3-1 lead on two Shanelle Martinez points only to watch LCCC come back to grab a 9-6 lead on three McKenzie Earl points. LCCC led 13-11 when WNCC shifted gears as Juliana Oliveira had a kill and then Jayla Brehmer had two service points for a 14-13 lead.

“I think now everyone is feeling more comfortable being on the court and it showed today,” Fava said. “Whoever came in did a good job. That is what we need because we are all talented and the season is long, so everyone has their time to play.”

WNCC, 21-3, will be back in action Friday when they travel to face Northeastern Junior College in Sterling, Colorado, with a 7 p.m. first serve.

“We definitely have to serve like tonight,” Fava said about Friday’s game between two teams that are 2-0 in conference play. “We need to keep them out of system, keep our energy up, and attack them from the beginning, and don’t let any balls drop.”